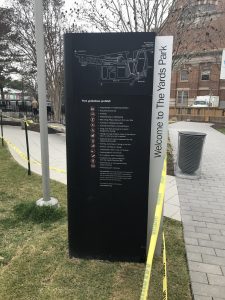 I arrived at the park at 11:00am and the weather was cloudy and chilly, 48 degrees. My initial observation of the park was there are no primary entrances, instead there are multiple openings that access the park which will complicate surveys. Park users can enter the park from the Anacostia Trail (i.e. Boardwalk along river), anywhere along Water St. SE and the end of 4th St. SE and 3rd St. SE, and via the Anacostia River (if traveling by water-craft). Another observation is the weather, being chilly and cloudy, seemed to discourage park users from visiting the park. Lastly, the park encompasses multiple restaurants in the large building(s) which is where many of the park users were traveling to after walking through the park. For observational purposes, these park users were recorded, but it is undecided within our group if they should be included moving forward. It seems likely they will be included in our study because they used the park to travel to these restaurants, this would be a reason why they are at the park.

To summarize my observations from 11:30am-12:00pm near one end of the Park Bridge (closer to the large building) in the tree-lined seating, I recorded 113 of the park users’ activities which included: many walkers and joggers on the boardwalk, a family playing soccer and throwing a baseball to each other, women taking their dogs to the Dog Run, groups cycling through the park, and a group of men roller-blading. The gender makeup of park users of the 113 include: 51 women and 62 men. I also recorded the race of the 113 park users; when the user was too far or I was unable to determine, the user was marked UN for Unknown. The data is the following: 77 White, 14 Black, 1 Hispanic, 1 Asian/Pacific, and 20 Unknown. *Disclosure: I did not include the employees of the Capital Riverfront, since they were not “park users,” but for transparency there were 2 Black men cleaning up trash and fixing chairs. Also, I did not include any children in the 113 park users, but I did note their physical existence in my observational notes.

Overall, the park is a highly planned design that includes a Canal Basin with a Water-Wall, Dancing Fountains, Dog Run, Great Lawn, Park Bridge, Overlook Pavilion, Light Tower, Terrace Lawn Steps, Boardwalk, River Street Garden, and areas between the large building with seating. Grass areas of the park were currently blocked except for an entrance with yellow tape or orange plastic fencing. The lawn space between the two buildings were marked with “No Dog” signage. Signage around the park is minimal, but did exist. Some signage was on the park’s history, location of park features, and rules that applied to park users. Not intended uses or casualties of a park observed include: [1] A lot of trash overfilling the bins and thrown onto the ground at the Overlook Pavilion. [2] Chalk drawings had been drawn onto the stone at the Overlook Pavilion and on the Boardwalk. [3] A homeless person was using the lounge chair in the River Street Garden to sleep on with a sleeping bag. 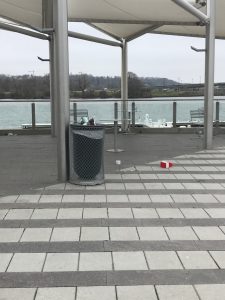 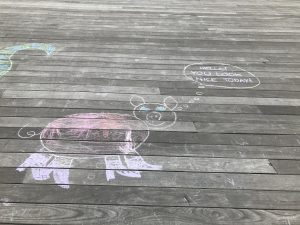 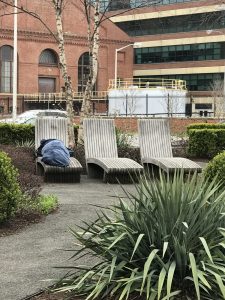 For future visits, the best day to visit most likely is when the Canal Basin and other water features are filled with water and the weather is warm in order to have enough park users to study that are not only using the park as an intermediate to go to another place.