My first initial observation, is that the parking space is very dominant in City Dock. There are a few cars parked in the car and sitting for a lengthy time period. In the 30 minutes present at the park, two women are seen going on a walk through the City Dock. There are a few benches along the river, and one random bench under a tree across the street. The benches look old and somewhat dirty. There are many signs towards the green areas that say “No Trespassing” The green area is mostly private property. There are also signs that mention the historical significance of the river, George Washington, and his childhood home.

Overall, I would say that this space is designed for access to recreational use in the water.  In my opinion, lingering is not encouraged and this space is not an area where the city wants people to spend a lot of time standing and exploring. The lack of development of the seating area and the dreariness of the parking lot, don’t really make this an attractive park for outsiders. For the residents that live along the river, and the private greenery where trespassing isn’t allowed from the public makes it a very attractive place to live. In contrary, if the public wants to go out in the water this is an ideal location to park or bring a boat on to explore the water.

I was particularly interested in the graffiti located under the train station. Although, not technically a park. I found many ways in which lingering, and graffiti are discouraged around the station. The rails and gates made it very difficult for anyone to get under the train station unless getting through tight spaces. There are also signs such as “No Trespassing” or “No Skateboarding” 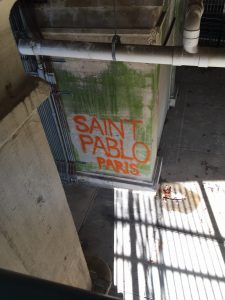